Girls’ Prep Player of the Year

This was a close race between four or five talented hockey players. For us, what it came down to was Nearis’s performance in the postseason. Unlike the coaches’ awards, we wait until the playoffs are over before making our final selections. Since the best players can usually be found on teams that reach the playoffs, we think playoff performance should be considered. And Nearis put her team on her back and went out and dominated in all three of her playoff games, including back-to-back playoff hat tricks against St. Paul’s and Loomis. It was a remarkable performance that we feel moved her slightly ahead of a strong field.

We’ve been watching Jess Schryver play her entire four years at Loomis, leading the Pelicans to four straight NEPSAC semifinal appearances. She has scored well over 150 career points, which is a remarkable statistic considering the heavy D-I schedule Loomis plays. It’s a shame Schryver was injured in the first playoff game against Williston because she was nowhere near 100 percent in the Pelicans semifinal loss to Kent. There was no way Loomis was going to beat a red-hot Kent team without its best player.

Farden is another player who had a tremendous four-year career, leading Nobles to two NEPSAC championships, one as a runner-up, and one semifinal finish. If Farden hadn’t missed a stretch of games with an injury, she could have been Player of the Year. In the Championship Game against Kent, Farden seemed to be on the ice the entire game, playing outstanding hockey at both ends of the ice.

Brooks came up one game short in its quest for the D-II championship this year, losing to Rivers. But Kukas had another spectacular season. The St. Anselm’s commit is a bit on the small side, but is one of the most athletic goaltenders we have seen at this level. She gives her team a realistic chance to win every time it plays, and that’s the best compliment you can give a goalie. We think there will be many D-I schools looking back over the next four years, regretting not recruiting her.

We watched St. Paul’s play a number of times this season, becoming increasingly impressed with Allard’s game. Most notably, Allard is one of the best skating young defenseman we have seen at this level. Although not big, she is aggressive and strong on the puck. She also has an excellent stick. If Allard continues to improve at this rate, she should be a force in the league over the next three seasons.

Girls’ Prep Coach of The Year

Of all the awards we give out, this might have been the easiest one to decide. In one of the best first-year coaching performances we can remember, Cooper came within one game of making the D-I playoffs this season, winning 14 games in total. What’s even more remarkable is that in its previous three seasons, Hotchkiss had only won four games in 2017-18, five games in 2016-17 and four games in 2015-16 -- and that was when the Bearcats had Lindsay Reed, the top goalie in prep hockey, between the pipes.

Worcester, Mass. – Kent won its first-ever Division 1 NEPSAC Girls’ Hockey Championship with a resounding 4-1 win over a previously undefeated Nobles team. Senior Julia Nearis, who led Division 1 scoring in the playoffs with seven goals in three games, propelled the Lions to the championship and was named MVP.

Nobles came out of the gates flying and was all over what looked to be an exhausted Kent squad. The first period ended 0-0, but Nobles had Kent on its heels for a majority of the period. Kent junior goalie Catie Boudiette made some key saves to keep the Bulldogs off the board.

Nobles carried its momentum into the second. The Bulldogs were finally able to break the deadlock with 5:29 to go in the period on a power play goal as sophomore Katie Pyne launched a quick shot five-hole. Pyne was given the chance on an impressive pass from senior Lily Farden. Farden, it seemed, never really left the ice. She was anywhere and everywhere for Nobles. Boudiette of Kent made some more key saves to keep it at 1-0 Nobles heading into the final 16 minutes.

Kent would come out for the third period a completely renewed team. The line of Nearis and the Welcke twins skated around the Bulldogs and put on heavy pressure early, forcing a Nobles penalty. Finally, a little over five minutes into the period, Kent leveled the score at 1-1 on a power play goal off a brilliant series of passes from Luisa Welcke to Lilli Welcke to eventual goal scorer Millie Rose Sirum. A couple of minutes later, the Lions struck again, finding the back of the net on a similar sequence. This time, it was senior Kiersten Goode from fellow senior Cec Ehrhard to put Kent in the driver’s seat with a 2-1 lead. Nobles never gave themselves a chance to bring the game back to even. They appeared shocked at the heavy pressure they were under, and never had the chance to regroup. Plus, Nobles coach Tom Resor had already used his timeout in the second. Nobles did have one lengthy power play opportunity, but the Kent defense was composed and seemed determined that the title was heading back home to Western Connecticut with them. Senior Haley Uliasz would extend Kent’s lead to two with 3:44 remaining on the clock, firing a rocket from the point that Nobles’ goalie Taylor Hyland never saw coming. Nearis would then add an empty-netter late to give Kent the 4-1 win.

Three years ago, when this year’s Kent seniors were freshmen, they met New Hampton in the NEPSAC Division I final. They gave up a late third-period lead and, with it, the championship that was right within their reach. We couldn’t help but think of how that day might have impacted this group of seniors and the way they came out for the third period. If the Lions had played the first period the way they did the third, the game would have been nowhere nearly as dramatic. They definitely showed today that they were the best team in New England girls’ prep hockey this season. 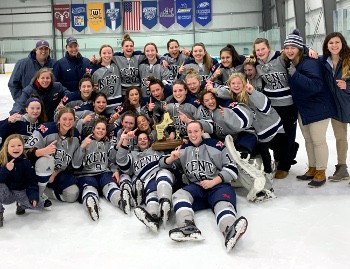 Kent celebrates its first-ever Div. I championship, a game in which they trailed Nobles 1-0 after two, but came out hard in the third, scoring four goals in under ten minutes to win 4-1. (Photo: Kent School) 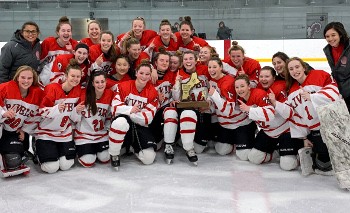